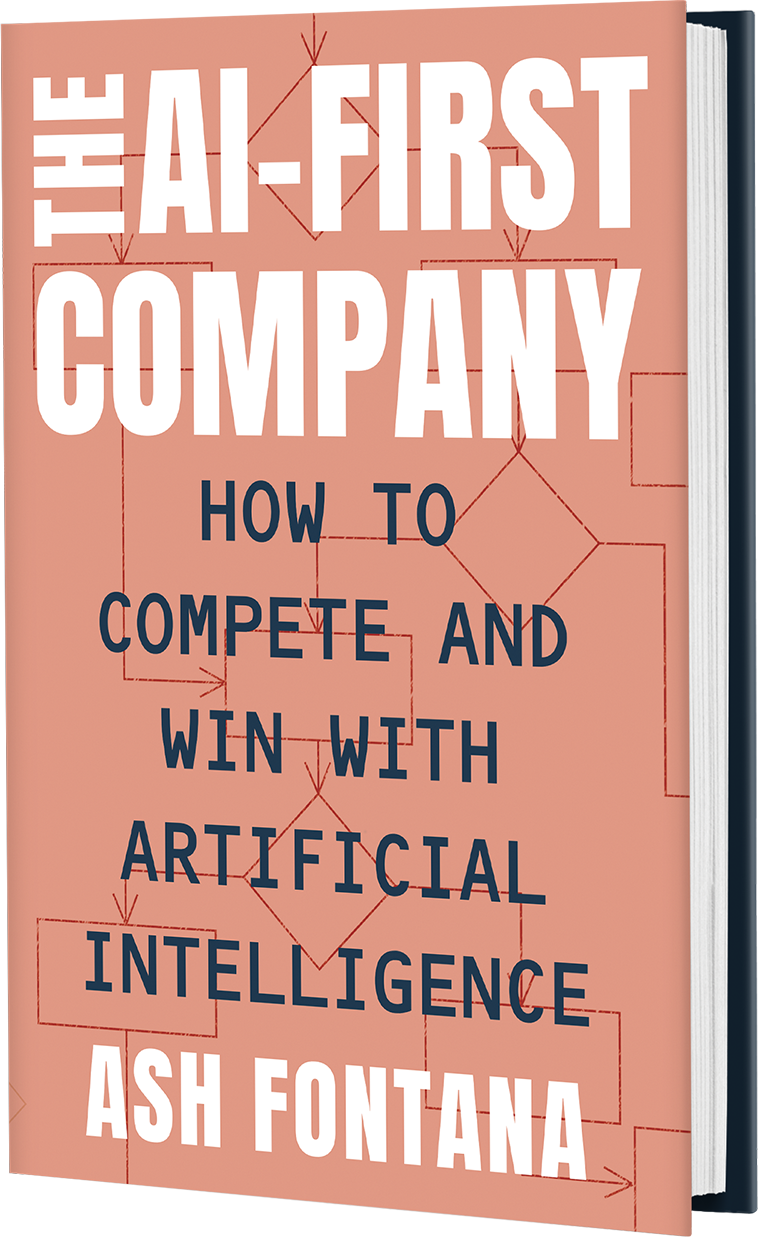 Artificial Intelligence is transforming every industry, but if you want to win with AI, you have to put it first on your priority list.

AI-First companies are the only trillion-dollar companies, and soon they will dominate even more industries, more definitively than ever before. These companies succeed by design — they collect valuable data from day one and use it to train predictive models that automate core functions. As a result, they learn faster and outpace the competition in the process. Thankfully, you don't need a Ph.D. to learn how to win with AI.

Listen and buy the audiobook

“An engaging read with important implications for the future of business. Whether you’re launching a start-up or integrating emerging technologies into your existing company, Ash Fontana provides not only a comprehensive framework for understanding AI, but also practical advice for developing an ‘AI-First’ mindset.”

“Fontana explains AI with untold pragmatism, and his practical analysis of how to get started with an AI-first mindset has the potential to reshape how we do business”

— CATHERINE LIVINGSTONE, AO, FAA, FTSE, chair of the Commonwealth Bank of Australia and chancellor of the University of Technology Sydney 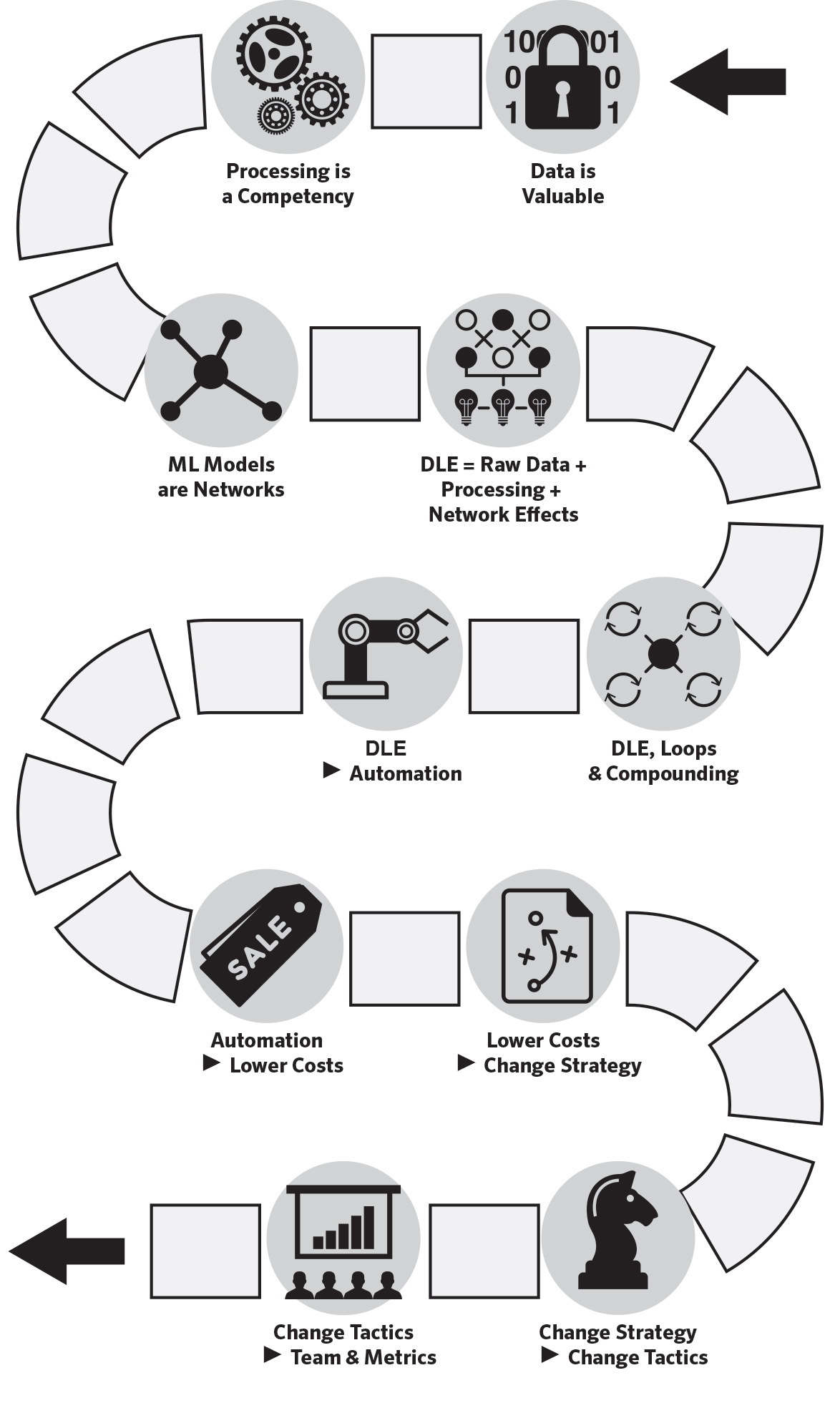 The framework is organized into eight chapters, each one building upon the one before it.

In The AI-First Company, internationally-renowned startup investor Ash Fontana offers an executable guide for applying AI to business problems. It's a playbook made for real companies, with real budgets, that need strategies and tactics to effectively implement AI. Whether you’re a new online retailer or a Fortune 500 company, Fontana will teach you how to:

“Ash Fontana thinks about building companies in a really unique way. His ideas helped companies like ours get started, and now they’re in a book for you to use too.”

“A must read for anyone who seeks to understand the history and future of AI, and, more importantly: how to apply it to business in a very tactical and direct way.”

— TOM TUNGUZ, managing director of Redpoint Ventures and author of Winning with Data

“An indispensable guidebook for twenty-first-century business leaders. This is essential advice for everyone from entrepreneurs to Fortune 500 CEOs.”

On Leadership: Automate to Excellence

Investing in AI: Ash Fontana and The AI-First Company

Thoughts in Between: How to Build an AI-First Company

The Full Rachet: How to Value AI, Data Network Effects vs. Data Learning Effects, and Evolution of the VC Asset Class

If you want to win with AI, you need to put it first on your priority list. That means reading and learning everything you can about the development and uses of AI, from core skills to cutting-edge innovations. My new playbook, The AI-First Company, is a great place to start: it will teach you strategies and tactics for applying AI to your most pressing business questions.

There are many additional excellent resources available for deepening your knowledge of AI, its theory and its practice. Here is a list of the books that have been most useful to me. I hope you enjoy them, too.

The Brain Makers by H.P. Newquist

The history of pioneering work done to develop the very first intelligent systems at MIT. It’s difficult to find, but it is perhaps the only book covering this topic so extensively.

The modern history of neural networks, including portrayals of key people such as Geoff Hinton, written by a talented journalist and author. AI-First companies can learn a lot about how a few pioneers attracted the best researchers to build a new body of knowledge. Along the way, they also built useful tools that spread far beyond their labs.

Age of Insight by Eric Kandel

A history of multiple disciplines, including art and psychology, that were explored in early 20th century Vienna in pursuit of understanding our minds.

The Most Human Human by Brian Christian

The history of the Turing Test – the test we still use to determine if an intelligent system is so like a human that it can deceive a panel of qualified judges. This book is fun to read, and covers the first half of the AI-First Century.

Not so much history, but future: this is a science fiction novel first published in 1984 that predicts much of what will become intelligent systems, well ahead of its time. Gibson writes and weaves multiple story lines with distinction, characterizes with color and paints pictures with precision.

Bostrom’s book was big for a reason. This well-written and rigorous exploration of the potential dangers of artificial general intelligence may have some applicability to particularly powerful systems in AI-First companies.

From Bacteria to Bach and Back by Daniel Dennett

A contemporary and highly relevant theory of how to safely make and deploy AI.

This covers multiple, existential risks AI poses to humanity in a sensible, rational way. The numerical articulation of the relative risk of AI could help AI-First companies explain the potential impact of their system with respect to other, far more concerning systems.

The most clearly written and comprehensive text book on probability. This is the basis of many methods used in practice. Tested by multiple generations of students.

The Book of Why by Judea Pearl and Dana Mackenzie

The introduction to causal reasoning for computers, and an elucidation of why it matters in an era of obsession with more modern methods, such as neural networks, if we are to make progress in the field of intelligent systems. Again, this is the basis of many methods used in practice, knowingly or not. This is the most accessible of Judea Pearl’s books, but there’s a trove of technical detail in his other books.

On Intelligence by Jeff Hawkins

The book that gave me the most usable models of neuroscience with respect to understanding neural networks, and how we make decisions.

The Master Algorithm by Pedro Domingos

This is a thorough description of contemporary machine learning methods.

The Computer and the Brain by John von Neumann

This lecture by the man who arguably invented the computer connects what may be possible to do with computers, leveraging what we know about the brain, right at the start of the AI-First Century.

The Case Against Reality by Donald Hoffman

What you know, what you think you know, and what’s true are invariably misaligned. Hoffman explains how we sense and model the world in a way that may help AI-First companies think about what a machine may be able to say—and what it will not be able to say.

The economist’s view of how AI-First companies work. The many mechanisms, diagrams, and case studies included in this book help the reader apply known, economic concepts in their company today.

The Big Nine by Amy Webb

Recent release that draws attention to the potential problems created by those who build AI today, and what the world may look like if they control much of the economy and society. Leaders of AI-First companies may find it useful as they think about the potential impact of technology.